You are here: Home / More Latina / When A Purse Is more than a Purse

style=”text-align: justify;”>I recently found out one of my close friends was a victim of domestic violence and abused when she was a child. Needless to say her story more than shocked me! Coming from a loving family and having a devoted and loving father, this just makes the idea of so many women and children being abused on a daily basis and denying it, refusing to leave this situation, a distant reality. So her story was a wake up call to me. Since then, I have been looking for opportunities to volunteer, help, make a difference, bring a strong message that leaving is possible, there is no shame in it and leaving is the best option! Even if they themselves are then accused of domestic violence by a controlling partner, there are people like this domestic violence defense attorney who are ready and able to help defend them, should the situation escalate and be taken further within the law.

So I jumped at the opportunity to potentially learn more about lawyers and volunteers who work hard to help these victims of abuse. I am eager to also participate in sharing all the amazing work Allstate Foundation is doing to bring awareness, as part of Domestic Violence Awareness Month in October, using the Purple Purse, as a symbol for domestic violence, symbolizing a woman’s way to escape the cycle of abuse by gaining financial independence. Now in its third year, The Purple Purse campaign has pledged to donate up to $350,000 to the YWCA for programs designed for assisting survivors of domestic violence and other women in need.

Because there are so many genuine cases of domestic violence, people tend to overlook situations in which the laws are manipulated incorrectly. For example, when people falsely accuse their partners of domestic violence for their profit, the cases are generally dismissed. As a result, many people accused of committing a crime may feel instantly guilty and forget that they have legal rights that need to be protected. In case you are facing any such an issue, you can contact law firms or directly toggle around the internet to view website(s) of such firms that may be the best option for you.

If it is a genuine case, you’re probably asking yourself, how can I help? Taking action is simple – Purple Purse: Pass It On. Have friends and family check out the purse at: www.purplepurse.com, using the code! 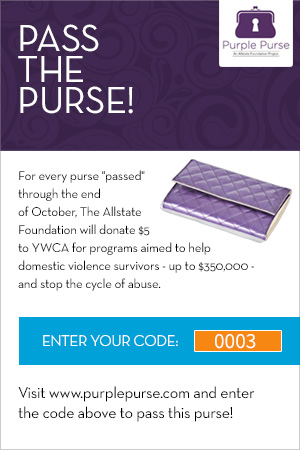 1,300 purple purses filled with domestic violence information and facts will be distributed throughout the U.S.. Each purse has a goal of being passed between family, friends, community leaders, celebrities, media, and Allstate employees and agents sparking important conversations and raising awareness. The Allstate Foundation will donate $5 each time a purse is passed and checked-in at PurplePurse.com. So come, help us!

For more information also check out: