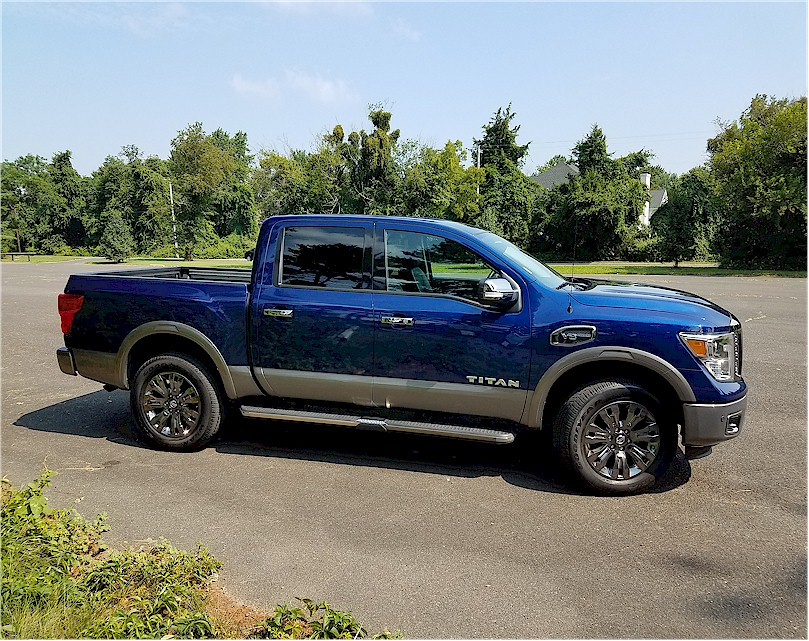 I love driving a truck! I especially enjoy driving the 4X4 trucks because you sit a little higher than most vehicles and you can see your surroundings and the traffic better. So I’m always excited when I’m given one for review.

The 2017 Nissan Titan 5.6-Liter Endurance V8 Platinum Reserve 4WD CC arrived all cleaned up and ready for some test driving. So we took it to our local home improvement store and loaded it up with mulch and brought it home to see how it would handle with a typical load. The truck had been used and it had over 10,000 miles on it, but the interior and all the options included made it more like driving a luxury car than driving a truck!

However, the truck needed some engine/transmission adjustment. When stepping on the gas, it took off nicely under moderate acceleration. However, when it reached 3rd gear it would hesitate and you needed to step on the gas pedal a little harder to continue on smoothly. This didn’t happen under a heavier acceleration- only on light to moderate acceleration. If we were the owners of the truck, it would have gone into the shop for some needed adjustment.

Once you got past the hesitation, the truck was a good vehicle and pleasant to drive. It had a leather appointed interior with comfortable leather seats. Numerous adjustments were available for the electric seats and they were also air cooled and heated in the front with the rear seats having heating available.

The Nissan came with too many options to list, so for all the options that came on the truck, see the MSRP sheet (aka Monroney sticker) by clicking on the picture below. 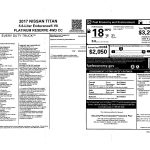 One funny thing happened while we had the truck for review. Our neighbor (who is a Ford truck aficionado) came over to look at the Nissan. His first comment was that it looked just like the 2017 Ford F-150 Platinum. He even thought that Nissan had ripped off the “Platinum” from Ford. 🙂 He looked over the interior and stated again that it looked just like the new Ford! I didn’t argue, but it made me look at the 2 trucks and do a comparison for myself. So here is a picture of the Ford F-150 Platinum 4×4 with the Nissan Titan Endurance V8 Platinum Reserve 4WD side by side:

While there are some similarities (they’re both trucks!), they both price out at about the same MSRP of $56,000 – $57,000. The options found in both trucks are almost identical as well.

We’ve never had a Ford truck for review so I can’t make an informed comparison. What do you think? Do they look alike to you?

We enjoyed the Titan and were sad when they came to take it back. I’d recommend that if you’re interested in getting a new 4×4 crew cab pickup truck, that you don’y overlook the Nissan Titan. Go take one for a test drive … I believe you’ll be pleasantly surprised.

Let us know what you think and give us a Trendy shout!