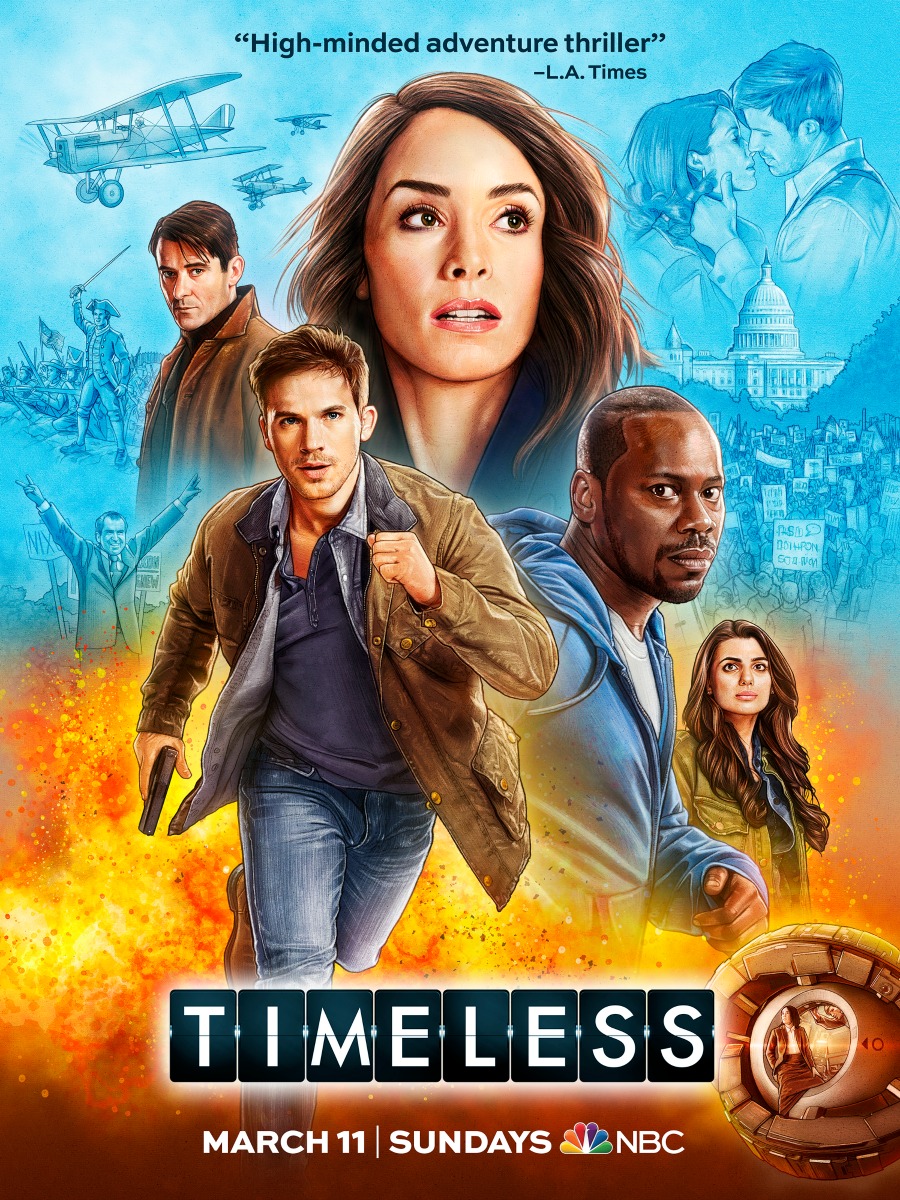 I watched Timeless on NBC holding on to my seat! I’m a HUGE fan! The whole travel in time, adventure, mystery and awesome cast made this show one of my favorites! I actually have the whole season saved on my DVR and go back often to re-watch some of my favorite episodes like the Lincoln Assassination or the Capture of Benedict Arnold!
That’s why I am so excited to have been invited to attend a special event in NYC this past week in celebration of Women’s History Month and Timeless’ return to NBC on Sunday, March 11th PEOPLE & Sony Pictures Television hosted a premiere event at the New-York Historical Society (N-YHS) in conjunction with the Center for Women’s History. The first such initiative of its kind in the country dedicated to spotlighting female contributions to history.
N-YHS’ Center for Women’s History provided the perfect venue to showcase the important and powerful females throughout history and share the women of Timeless, both in-front of the camera and behind the scenes! So exciting, isn’t it?
After the screening, there was a Q&A moderated by Editor in Chief of PEOPLE, Jess Cagle with Timeless star Abigail Spencer, co-showrunner Arika Lisanne Mittman, executive producer Marney Hochman, costume designer Mari-An Ceo, and Vice President, Chief Historian & Director of the N-YHS’ Center for Women’s History Valerie Paley to discuss the importance of highlighting women in history, the impact they had on today’s culture, and how these amazing trailblazers are illustrated in Timeless.

Here are some of my favorite moments from the Q&A:

Q: Do you outsource or make all the costumes on the show?

Mari-An Ceo:  For our principal actors, because they have to have multiple outfits – it’s hard enough to make one but it’s really hard to make three in a couple of days. For background players we go to costume houses and sometimes we’ll buy things depending upon what we need but with principals we pretty much make everything.

Abigail: They make it in front of my eyes, there’s this guy named Carlos who pretty makes Ihem in front of our eyes.

Mari An – She asked for a dress for a photo shoot and we pretty much designed the dress together in like five minutes and Carlos draped it on her and you look down and he made it within a few hours.

How has it been like being back shooting the show?:

Abigail: I don’t feel more pressure, I feel very grateful. I mean we got cancelled, I don’t know if you guys know about it and then three days later we got picked up, We moved the production from Vancouver to Los Angeles, so we’re all home. I have a nine year old, Mari An has a 13 year old. We’re all parents so it’s nice to be home so our kids now come and see us at work.  I feel grateful for being given another go at it and we are so grateful to the fans it was really their love and their rabid appetite for the show that brought us back. So when you come at it with that attitude, it’s nice.  You see that this is the real test of the show.

Q What are your feelings on gender issues and gender equality?

Abigail:  I will say that Frances McDormand, dovetailing what she said in her speech let’s talk about an inclusion rider. If we just level the playing field across the board, because there are so many talented women in every department that are just not getting the opportunities because they haven’t been able to have enough stuff to be hired. So I am very curious about that statement, the inclusion rider. If we just reset the standard, reset the tone as actors, as artists and make those requests, I think things could really change. We have to over correct in order to achieve balance.

WHAT TIME PERIOD IS YOUR FAVORITE?

Mari-​An Ceo: All of them! I have this amazing experience where I go in read a script and have to quicky learn about that era. We have to do it very quickly – I may know that part of history but then when you get into these scripts you really have to know. You really have to know where the hemline is. During certain time periods, women held onto their clothes for 15 years – you have to make sure that you know what they were truly wearing during that time or you aren’t staying true to the clothing worn during that period.

Abigail: If I had my druthers the whole show would be about why the costumes are they way they are. It would be one long runway show!

Abigail: The best day of production is when we are in a brand new time period. We are dressed to the nines our hair and makeup department are just so great this year.

It’s really funny. We shoot right next to “This is Us” and they’re all with their jeans and t-shirts and we all look like we’re really doing something. And they’re like “Oh look at them, the “Timeless” crew they always look like they’re working so hard.” We take over the whole lot, the New York streets, Milo sees me in a different outfit every time. I actually visited their set in my suffragettes outfit and Chrissy Metz was doing her scene and they were rolling and I almost accidentally walked into the frame. And I thought how funny would it be if I was sneaking behind her in the scene.  It’s so nice to be right next to them because they are so lovely.

ABIGAIL: WHAT CHARACTER WOULD YOU WANT TO PLAY?

I want to play Katherine Hepburn before it’s too late. As an actor, I’m really not super into playing real people but she’s someone I would love to play. I can definitely sound like her and I can look just like her and Mari An made one of my dreams come true this year because she actually made the Philadelphia Story dress for Lucy to wear in our Hollywood 1940’s episode and it was my dream. I’d like to play her while she was making “Philadelphia Story.”

Here’s a little history on her. Katharine Hepburn was box office poison before this movie was made. She actually could not get hired – every movie she made was a total bomb and she was a total diva. She ended up doing Philadelphia Story on Broadway and her boyfriend was Howard Hughes at the time and he bought the rights to the play and gave it to her as a gift and told her, this is how you’re going to make money. So she became the producer of the movie. She made that movie happen and then the movie was so successful and that movie turned the tide for her and she became one of the most famous actresses of all time.

ABIGAIL ON  THE TIMES UP MOVEMENT

I’ve always said no to a lot of stuff. I always protect my characters and how I represent women. Especially as a mother I was more conscious of it when my son was born. I now have a community behind me where that’s not even a conversation. I think we are really intentional with Lucy on Timeless in how she looks and we are careful not to sexualize her. She’s beautiful but she’s brillant. The producers pitched it to me that way – her superpower is her brain. I wanted her to start out that way. I wanted her to feel very normal so when she’s having to do these extraordinary things.

Here is what we need to look for:

After barely escaping an explosion at Mason Industries, Wyatt (Matt Lanter) and Rufus (Malcolm Barrett) chase the Mothership back to a French battlefront during World War One to rescue Lucy (Abigail Spencer) from Rittenhouse.  There, they discover that Lucy has recruited Marie Curie (guest star Kim Bubbs), the famous French scientist and the only person ever to win two Nobel Prizes, to help save the life of a wounded American soldier, only to learn that the soldier is Lucy’s own great-grandfather who Rittenhouse is bringing to the present to be their leader.

I had a chance to preview Timeless New Season’s episode which airs tonight, so I can tell you, it’s going to be…..AMAZING! You won’t want to miss it!

Have you watched the show? As usual, can’t wait to hear what you think, give us a Trendy Shout!