You are here: Home / Christmas / Zachary Levi and Gina Rodriguez Take On The Movie Star 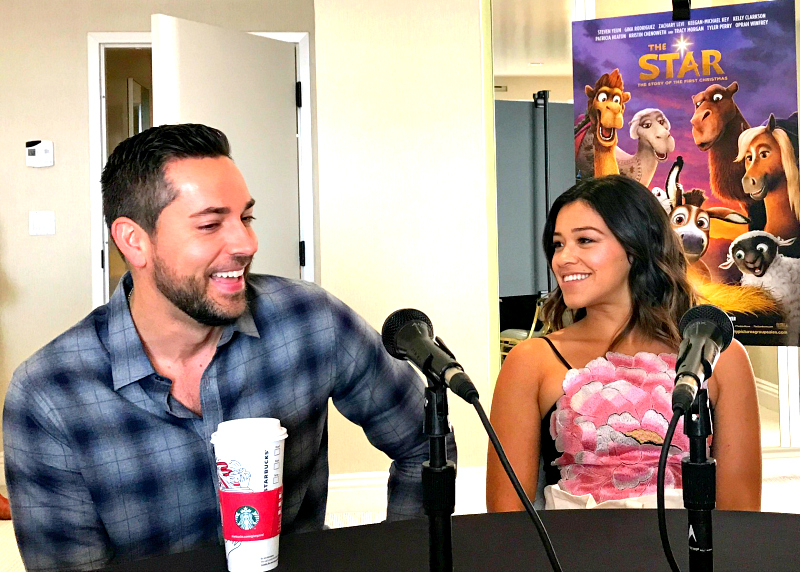 Our Round of interviews for the movie “The Star” started with Zachary Levi and Gina Rodriguez, who play Joseph and Mary in the movie.

It was like chatting with my best friends and having a super relaxed conversation about something we all loved: the movie!

Zachary Levi had a supporting role in the television movie Big Shot: Confessions of a Campus Bookie (2002) with David Krumholtz, Tory Kittles, Jennifer Morrison and Nicholas Turturro. He then began acting as Kipp Steadman in the TV series Less Than Perfect (2002) with Sara Rue, Andrea Parker, Eric Roberts, Andy Dick and Sherri Shepherd.

He was seen in the television movie See Jane Date (2003) on the WB with Charisma Carpenter, Holly Marie Combs, Linda Dano and Rachelle Lefevre. In his spare time, Zachary enjoys skateboarding, snowboarding, skydiving and participating in various other sports.

Rodriguez’s career really took off after starring in the 2012 film Filly Brown, which also featured Jenni Rivera, Lou Diamond Phillips and Edward James Olmos. The movie explores the rise and fall of a young rap artist played by Rodriguez. As she explained to Complex.com, she picked this project because it defied common Hollywood stereotypes of Latinos. “This movie shows our stories are all the same. At the end of the day we are all one race, which is the human race. Filly Brown could have been a black girl, a white girl, an Asian girl.”

After Filly Brown was screened at the Sundance Film Festival, Rodriguez fielded numerous job offers. She turned down a chance to appear on Marc Cherry’s Devious Maids series because she objected to the way it portrayed Latinos. “That’s something I didn’t want to contribute to, the incorrect perception of a culture,” she told The New York Times. But Rodriguez soon found her dream project when she landed the lead in Jane the Virgin, which debuted in fall of 2014

One of my favorite parts of our interview was when asked about their favorite Christmas Movies and Traditions, they replied:

GR: I grew up with the nativity story, though. Like, that was definitely – and all the different versions and I feel like TBS and like Lifetime did a version every Christmas – I really enjoyed it so it’s really cool to be a part of this one.

GR: Oh, the one where he gets his tongue stuck on the –

GR: That’s the one where he’s like, “I’m gonna lasso the moon” right? And bring the moon down and you’re gonna eat it and stars are gonna come out of your eyes

ZL: What? I don’t remember any of that stuff.

GR: That’s what he says, right? Because it’s the most romantic part of it.

ZL: “You’re gonna eat the moon and stars are gonna come out of your eyes!”

GR: That is exactly the way he said it, it’s so romantic! Actually, that’s my boyfriend’s favorite movie, and last year in Thailand – he always watches it with his family on Christmas Eve with his dad –

ZL: Glad I brought it up.

GR: – We weren’t with his family, so he said – I do this every year and I’m not gonna be with my family but you’re my family now, will you watch with me? And it was the first time I had watched with him and it was so beautiful. I know. Their relationship, though, towards the end was really rough. His wife.

ZL: He and his wife in the movie? Well that all came full circle. Don’tcha remember me Mary? But that, to me, the great thing – I love the heart of that movie in that we are all – even in our worst bits, even if we feel like we have completely ruined our lives – and I’ve felt like I’ve done that plenty of times in my own life, but you are worth something. You are valuable. You are valuable to your family, to your friends, to your community, and the world would not be the same were you – if you were not in it. And I think that’s the greatest thing from that movie.

GR: That’s also the beautiful take on Joseph and Mary in “The Star” – because they’re, and the I think the way that they told the story was so beautifully done because it is such a delicate matter, but it’s done with such a light, like joyous and that element of we all are just trying, and we all are just attempting at being the best version of ourselves and we all fail. All fall, and Joseph feels that way.

GR: And Mary does, throughout their entire little journey, but it’s done in such a hopeful way that it’s not – the context isn’t, the weight isn’t so heavy so that children and adults with their different perspective on it can see the value in it which I think is very cool.

Here is a short clip of that conversation, thought you might want to check it out: 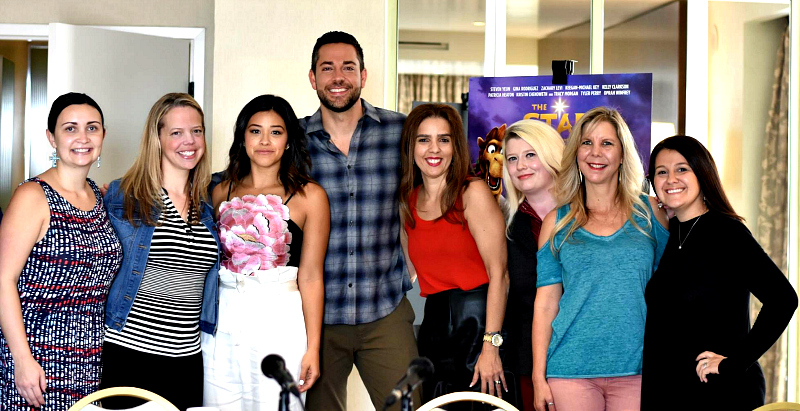 I hope you enjoyed our interview as much as I did and that you head out to the movie theater this holiday weekend to watch The Star!

Can’t wait to hear what you think, as usual, give us a Trendy Shout!